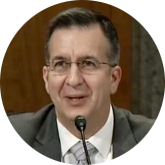 ADMINISTRATOR, OFFICE OF INFORMATION AND REGULATORY AFFAIRS (OR DESIGNEE)

Dominic Mancini serves as the permanent Deputy Administrator of the Office of Management and Budget’s Office of Information and Regulatory Affairs (OIRA), where he plays a key role in the coordination of the Administration’s information and regulatory policy activities. Located in the Executive Office of the President, OIRA reviews significant Executive Branch regulatory actions for consistency with analytical principles and Presidential priorities. OIRA also takes a leading role in statistical, science, information, privacy, eRulemaking, and related policy development, including serving as a lead in the implementation of the Foundations for Evidence-Based Policymaking Act, and the Federal Data Strategy. Among other responsibilities, the Deputy Administrator often serves as the Acting Administrator in the absence of a permanent head of the office, and Dominic served in that capacity during both the current and past Administrations.

In addition, he has held various positions within the office since joining OIRA in 2002, including serving as branch chief for natural resources and the environment, and economist for health, transportation, and general government. Prior to joining OIRA, he worked as an economist in the Food and Drug Administration preparing regulatory impact analyses for economically significant regulations, and as an analyst at the North Carolina Population Center, conducting demographic and health research in South America and East Africa. Dominic has degrees in economics and finance from the University of Florida, and a PhD in economics from the University of North Carolina at Chapel Hill.