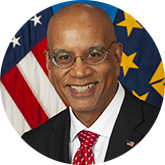 Kshemendra Paul was appointed Executive Director for Data Governance and Analytics in the Office of Enterprise Integration on September 16, 2019. He serves as VA’s Chief Data Officer and is responsible for leading data governance, data analytics, and business intelligence capabilities to inform VA-wide decision making and providing an authoritative clearinghouse for the collection, analysis and dissemination of information about Veterans and VA programs.

Prior to this appointment, Mr. Paul served as the Cloud Action Officer for the Department of Homeland Security (DHS) and helped coordinate efforts to migrate information technology assets to cloud management platforms and optimize data centers. He also served as the Information Sharing and Services Office Deputy Director for Mission and Strategy within DHS’s Office of the Chief Information Officer.

From 2010-2016, Mr. Paul led information sharing environment efforts for the Office of the Director of National Intelligence. In this role he was the U.S. government lead for advancing terrorism‐related information sharing. Mr. Paul worked closely with federal, state, local, tribal and territorial partners, as well as private sector and international allies, to balance the needs for information sharing and safeguarding to enhance national security and protect the American people.

Mr. Paul began his federal service in 2005 as the chief enterprise architect at the Department of Justice (DOJ) where he led the delivery of the National Information Exchange Model across public safety, law enforcement and homeland security sectors. From that position, he moved on to serve as the federal chief architect in the Office of Management and Budget (OMB) where he led federal enterprise architecture activities. His tenure spanned two administrations, four budgets and an $80 billion portfolio. At OMB, Mr. Paul directed initiatives that promoted innovation and transparency within the government, including Data.gov.